When it comes to rabbit health, as prey animals, bunnies are excellent at hiding pain and many symptoms until the issue is severe.  The following is a brief overview of some of the most common ailments that cause sick rabbits, but it is simply a guide based upon my research and experience.  Please consult your bunny's veterinarian if you suspect your rabbit is sick.
Section divider type: waves -- position: top
GI Stasis:
Rabbits ingest these cecotropes to gain nutrients and help keep their digestion in balance.  The cecum must constantly be fed with fiber from hay and small amounts of quality pellets.  This fiber also pushes ingested fur through the intestines.  Inadequate fiber can lead to sluggish digestion and an overgrowth of bad bacteria in the cecum.
Once bad bacteria takes over, gas and toxins are produced in the digestive system.  These cause gas, and since rabbits can't burp or vomit, the gas must be expelled rectally and is incredibly painful.  This causes a gradual gut slow down, and the pain prevents your rabbit from eating.
This is gastrointestinal stasis and can be deadly!
Symptoms of Gastrointestinal Stasis (GI Stasis) include gradual reduction and cessation of poop, bunny stops eating and drinking, rabbit is not interested in moving and may be in a hunched, "meatloaf" position, you may hear tooth grinding, and the rabbit's stomach will be hard and shrunken due to fluid being drawn into intestines.

Stasis treatment: Contact veterinarian immediately!  Oral fluids (water or electrolyte mix like Sherwood's Appetite Restore) via syringe, subcutaneous fluids (lactacted ringers injected under skin on back of rabbit's neck), infant gas drops (simethicone), Metacam (prescription pain reliever), heating pad, abdominal massages and exercise can be helpful, but please check with your veterinarian before administering these treatments.  A powdered food/water slurry such as Sherwood's Recovery Food or Oxbow Critical Care may be recommended but only if your vet ensures there is no blockage.  A hay heavy diet with a small amount of dark leafy greens (spring mix, kale, cilantro, spinach, chard, etc) will likely be helpful as your bunny recovers.  Looking for hay for your bunny?  Try Small Pet Select hay!
GI Obstruction (Bloat)
Bloat has similar symptoms to GI Stasis but happens rapidly and is an even greater emergency.  Bunnies can die in 6-12 hours if treatment is not administered!  Bloat is caused by an intestinal blockage that causes gas and fluid to build up in the stomach, causing intense pain.

Bloat symptoms:
Sudden cessation of pooping, rumbling in stomach, inflated, full stomach (not hard and shriveled like stasis).
Bloat treatment:
Seek emergency veterinary care ASAP!  Use a heating pad/disc or hot water bottle to bring your rabbit's temperature up while you seek emergency care.  Your veterinarian will likely take x-rays to confirm a blockage and administer IV fluids with medication.  Emptying of your rabbit's stomach under anesthesia might be required with surgical blockage removal as a last resort.
Cause of Bloat:
Believe it or not, bloat in rabbits can be caused simply by an almond-sized compacted hair ball.  Some veterinarians believe this is expelled in a cecotrope and swallowed whole by the bunny, causing a blockage in the intestine.
GI Stasis VS Bloat?
Shamefully, I did not realize the differences between stasis and bloat until viewing Dr. Barbara Oglesbee's presentation on this topic at the 2020 Midwest Bunfest.  Two months prior, I lost my 3-year-old Holland lop Hazel to what I thought was GI Stasis but I now am convinced was bloat.  She suddenly stopped pooping with no gradual decline, had a gurgling stomach as well as the other typical stasis symptoms.  She died while on the way to the vet's.  Had I known it was bloat and how little time I had, I would have immediately sought help instead of administering my typical stasis protocol.  My hope is that by sharing this information, I can prevent the loss of other bunny lives. 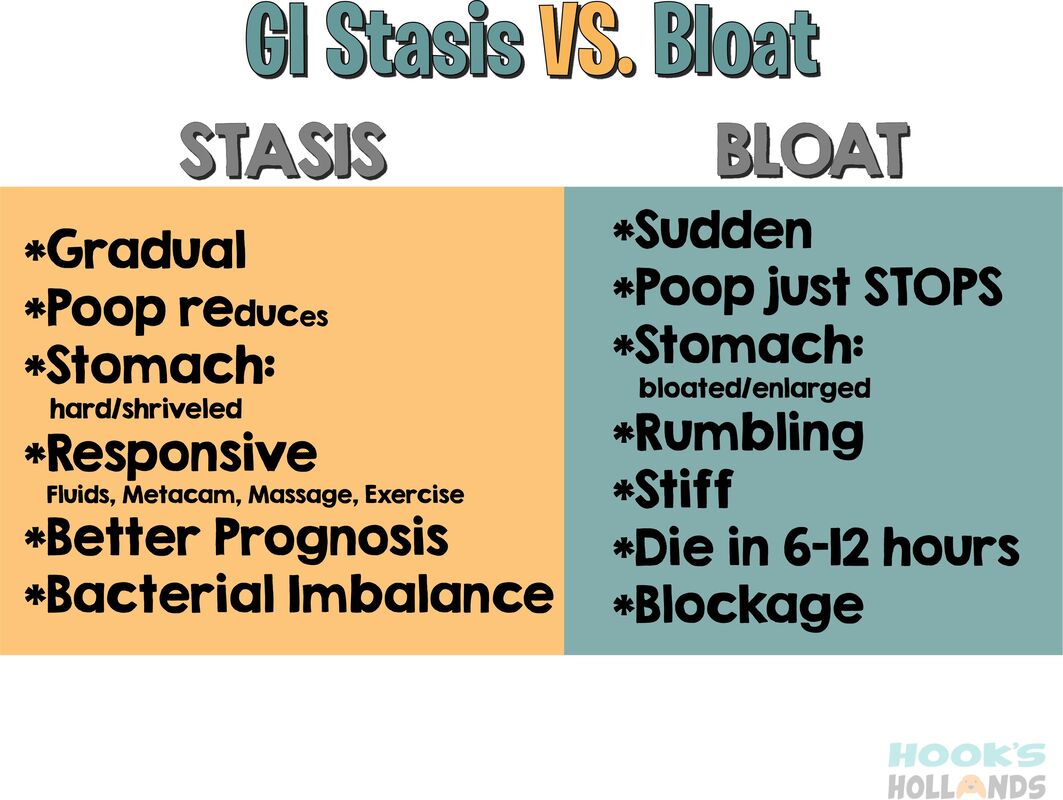 Fur Mites
Fur mites are not uncommon in rabbits and can come from the environment, especially for bunnies that play outside, or it can even be present in the hay.  You will likely see white flakes on the skin and stuck to the bases of the fur shafts.  The back of the neck is a common site for fur mites to occupy, and your bunny will likely be scratching a lot.
Thankfully, fur mites are usually easily treated with topical Revolution, which you need to obtain from your rabbit's veterinarian.  I have heard of some using Ivermectin topically for fur mites, but I have never used this on my rabbits nor can conclude it is a safe, effective treatment.  Remember to also thoroughly clean your bunny's area and belongings to eradicate the fur mites.
Ear Mites/Ear Canker
Ear mites present as crusty, scaly sores inside your bunny's ears.  The bunny will likely be scratching at his/her ears, and there might be blood from scabs being scraped off.  Do not scrape off the sores!  The couple times I've had rabbits with ear mites, I've successfully treated by suffocating the mites and softening the scales with VetRX Rabbit remedy.  I've heard of others using mineral oil, as you just need to kill the mites and soften the scaly sores so they can be safely removed.  It's also important to clean your rabbit's area, dishes, litter box, bedding, brush, etc to fully eradicate the mites.
Pinworms
Pinworms appear in your rabbit's poop as tiny little white worms - which may or may not still be alive when expelled.  Yes, they are gross, but rest assured that pinworms are species specific and are not contagious to humans.  Plus, they're pretty easy to eradicate and are quite common, possibly coming from hay sources or if a rabbit has outdoor access.  I only treat my rabbits if I see an issue, as I don't want to risk creating drug resistance.
Pinworm treatment: My choice is to use Safeguard Equibits pellets, 3 to 5 pellets per bunny daily for 5 days (dosage based upon 3-5 pound Holland lop rabbits with lighter rabbits getting 3 pellets and larger rabbits 5 pellets).  Stop for 5 days and then repeat treatment once.  Equibits are available at Tractor Supply or Amazon, but please check with your veterinarian for his/her treatment and dosage recommendation for your particular rabbit.

Is your rabbit sneezing or have a runny nose and eye discharge?  Several culprits are suspected to cause this.

The ailment known as "snuffles," is caused by the pasteurella bacteria and tends to be the generic term used whenever a rabbit appears to have a cold with sneezing and mucous on the nose.  Occasional sneezing, especially when your bunny is drinking or eating food or hay and likely inhaling some dusty food particles, is not concerning, but repeated sneezing and/or noticeable mucous are imperative to address.

Pasteurella (a.k.a. snuffles) is highly contagious to other rabbits, so you first and foremost should isolate the sick rabbit from any other rabbits and practice good biosecurity including washing hands and clothing that come into contact with your bunny.  Contact your veterinarian and request that a nasal culture be performed.  It's tempting to blindly choose an antibiotic and treat your bunny, but some bacteria are very resistant to specific antibiotics, so you need to know what you're up against to select the proper weapon.  A culture may cost several hundred dollars and take a week to obtain results, but it's truly the most effective option to eradicate whatever bug is making your rabbit sick.

According to my veterinarian, pasteurella (snuffles) is quite difficult to fully cure and often resurfaces later, especially when the rabbit becomes stressed.  Bordetella and pseudomonas are more likely to be treated once without returning.
Long story short, over the next month, this bunny received two nasal cultures, four trips to the vet, and two different antibiotics.  First, we treated her with Baytril, and while her symptoms lessened, the sneezing still was present.  Then, we cultured (which should have been done first but is very expensive) and found we were battling Pseudomonas bacteria, which can be resistant to Baytril.  The next antibiotic we used was Amikacin, which had to be injected for about ten days, which was quite miserable.  The nasal culture had to be administered again after treatment to ensure the Pseudomonas had been obliterated.  Fortunately, her results came back favorable with typical microbe levels, and her symptoms had vanished, so we stopped treatment.  My vet and I both believe that receiving the BunnyVac vaccine and the stress of moving environments the same week were likely to blame for the bacterial surge.  We both are of the opinion that the snuffles vaccine might not be a wise choice for low-risk rabbits not in community environments such as shows, fairs, etc.  It also requires a yearly booster.  This was a lesson I paid nearly $1,000 to learn, and I ended up giving the rabbit back to the breeder since I didn't feel it was robust enough for my breeding program.

As rabbits age - or due to genetic predisposition - tooth problems can occur.  Most tooth problems manifest either with eye or nose drainage, slobbering or drooling, or refusal and difficulty eating.
Malocclusion, which is where the top and bottom teeth don't fit together properly with top front teeth over the bottom front teeth, can make it difficult and painful for your rabbit to chew.  Rabbit teeth constantly grow like our fingernails, so misaligned teeth can require frequent trips to the vet for the teeth to be trimmed.  This is usually relatively economical since it is a routine maintenance procedure required to keep your rabbit eating and pain-free.  Molar spurs are also a possibility that can create discomfort in your rabbit's mouth.
As rabbits age and have a reduction in bone density, the roots of the teeth can actually be pushed up into your rabbit's skull, causing tear duct blockage in the eyes, abscesses, or infections.  It's important to have your rabbit examined by a rabbit-savvy veterinarian whenever symptoms such as nose or eye discharge, drooling, or refusal to eat occurs.  These symptoms are not always related to snuffles (bacteria) or GI stasis - it could be your bunny's teeth! 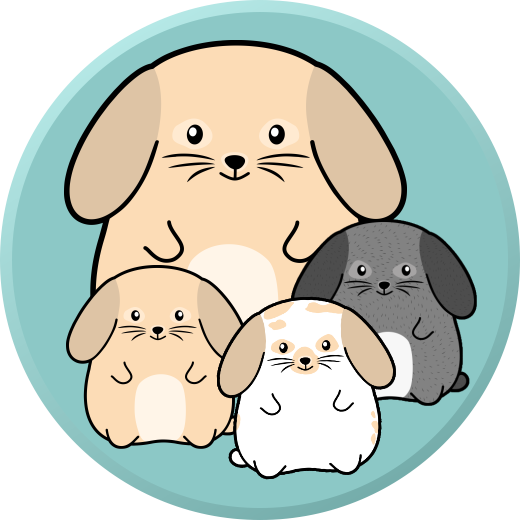